My first experience of Bendigo’s Internet connectivity wasn’t the best first impression one could hope for. I’d interviewed for a role at a local software firm, where the main pipe was an ADSL connection, about 6 Meg down and not quite 1 Meg up, the whole team sharing that one tiny link. Pretty underwhelming, for sure.

When I finally moved here, we managed (after a lot of hassle) to get a decent ADSL2+ connection installed, giving me around 16/1. Which is rough for doing promotions to client sites (especially if you’re uploading video), but at least it was workable - as long as you weren’t trying to do video calls. 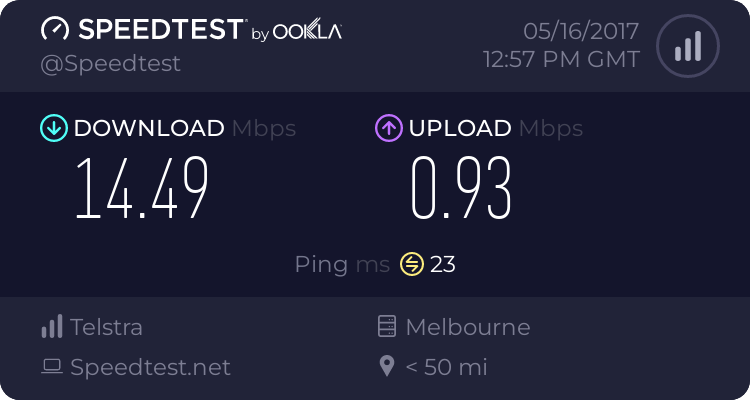 That said, if you wanted quick speeds and had the cash, both Testra and Optus have decent 4G networks here. Sure, you don’t want to be streaming Netflix over it, but if you needed quick internet just for certain tasks, then Wireless broadband, or tethering to your phone/iPad was probably the way to go.

An example of tethering speeds

But earlier this year, Bendigo exploded in Fibre deployment. Only to the node, but it’s better than what we did have. 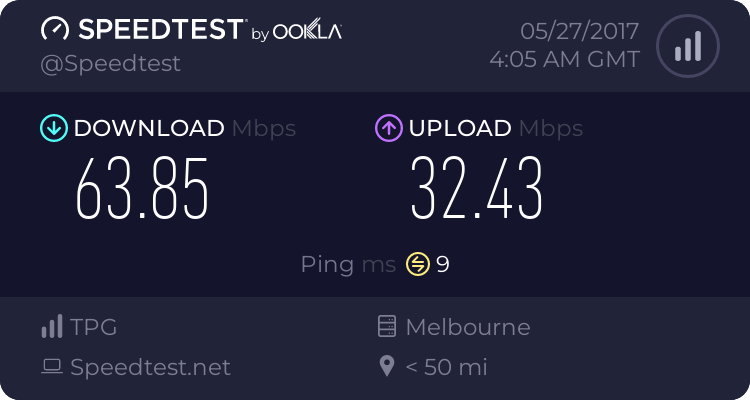 I ended up going with TPG initially, which was a bit of a research fail, because even though they offer static IP addresses with their ADSL2 connections by default, they don’t offer them with their residential NBN connections at all. I tried seeing if they could resolve it, but their awful call-centre reps can’t seem to do anything off-script. For some reason they wanted me to pay $99.99/month for the business plan, when I could get exactly the same thing from MyRepublic for $69.99/month. I don’t know about you, but that extra $360/year sort of comes in handy.

Another thing I love about MyRepublic, is they don’t try and sell you some bullshit speed package that your line may, or may not support. Whatever your line can do, that’s what you’ll get. All the other providers are pretty much just scamming you in a similar manner to Starbucks with their coffee sizes. These third tier providers will be the real disrupters.

Seems like slightly worse ping, but perhaps a better modem?

I love how Bill Morrow (CEO of NBN) says that Aussies don’t want fast speeds. I think by that, he’s saying that the average grandma doesn’t see the point and would be happy with 12 Meg down. That’s probably true. But local companies have found it faster to drive a USB stick to Melbourne, than to upload their large assets using the best connection we’ve had available, so it does cripple business. And my ADSL2+ connection struggled with basic video calling, which isn’t really that bandwidth intensive. And there was no way I could stream a high-quality feed if I wanted to demonstrate something to a client.

So, bottom line, there are great options out there for internet connectivity now in Bendigo, if you’re lucky enough to be in the areas that they’ve deployed. But I’d definitely recommend shopping around for a package that suits your needs.

Still, New Zealand is the place to be if you want internet done correctly!